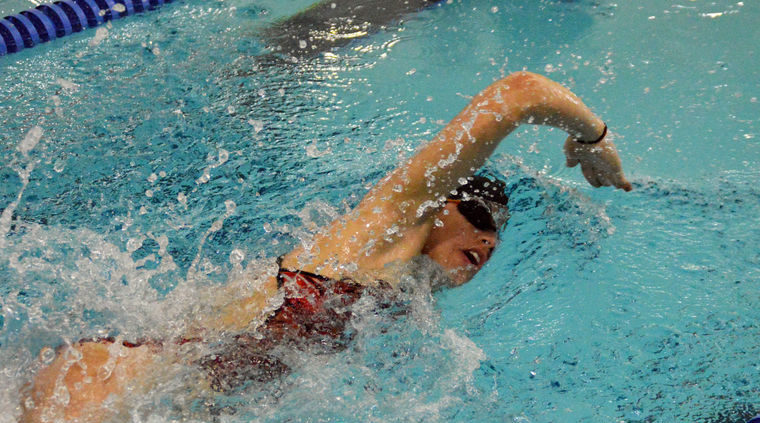 With modified events and a large field of teams, the HOPE College Invitational was a success for the host Edwardsville Tigers.

Edwardsville had five victories in the 17 events and finished with 335 points to capture first place. Springfield was right behind the Tigers with 299 points.

Not only did EHS win in the pool, but also outside by raising donations for Allison’s HOPE. It’s to help with cancer research, and to help local families affected by this terrible disease.

Champions for Edwardsville were Taylor Seilheimer in diving, Bailey Grinter in the 50-yard freestyle, Hannah Benson in the 100-yard butterfly and the 200- and 800-yard freestyle relay teams.

Seilheimer eked out a victory for the Tigers in diving, finishing with 378.15 points. Springfield’s Stephanie Bilinsky took second with 374.05 points.

The two will meet again in the Springfield Sectional on Nov. 12 with a berth in the state meet on the line. Seilheimer is a two-time state qualifier.

Grinter continued her dominant senior season. She won the 50 freestyle in 24.17. It was a 1.5-second victory over Champaign Centennial’s Isabelle Seten.

The other individual EHS win belonged to Benson, who won the 100 butterfly in 1:06.26. She beat out Centennial’s Lauren Feddersen, who finished in 1:06.87. It came after a third-place finish in the 200-yard freestyle for Benson.

Bushell was on both relay teams that won.

In the 200 freestyle, it was Bushell, Grinter, Emily Webb and Victoria Brady who won in 1:43.65. They won by two seconds.

Webb was swapped out for Hope Roderick on the 800 team, which took first in 8:31.40. It was a three-second victory.